Life is a permanent culture shock.

I'm a bit of a grumpy old man, rather like Statler and Waldorf

My Myers-Briggs Type Indicator is INTJ 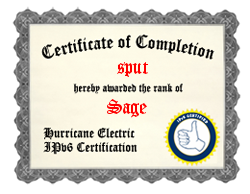 The origin of 'Superput' and the 'sput.nl' domainname.
Weird stuff from my Fidonet days (Dutch).

A cartoon by President Tune;

As you can see I'm either psychotic with stress or dreaming.
The pictures below, by Frenzy, might give you some idea you what I tend to dream about, and what I actually do (I don't drive them. I only know what makes them tick);

A painting he made for my 50th birthday;

An other photo by Latie;

Pictures of my younger brother Hans and me;
In the 1970's;

At my mum's 93rd birthday party;

With Albert-Jan Pool at my 60th birthday dinner at Surakarta;

A song (3244 kB; (dutch) about me by Repperdepep (dutch)
An old interview; Beursgang World Online (Dutch)
My Father's kite

A bit of history

Some of the stuff I did and really enjoyed:

To me, all science and technology is in fact art.

Lifestyle is when your life has become a logo.

My favourite sculptures are bridges;

Cats are my favourite animals.

Somewhere in the blue - violet range. Colour definitions vary a lot, so it's hard to tell (cobalt blue glass, for instance, has a shade of blue which is much deeper then what usually is referred to as cobalt blue).
Web safe colour 60F and Electric Indigo (6F00FF) are pretty close.

I have been running (Debian) Linux since the mid 1990's.
I do a bit of C programming. Some stuff here.
I also do a bit of hardware design. Both analogue and digital.
My internet setup here.

I'm definitely continental European and I have a dislike of most (not all!) things Anglo-Saxon. I consider Main-stream Anglo-Saxon culture to be intrinsically predatory and, in a symbolic way, cannibalistic.

Whisky and Gin and tonic
I also like Indonesian drinks, which in NL are referred to as ijs tjampoer and tjendol.
And I like tea: Betjeman & Barton.

I also like some scifi and film noir. Esp scifi noir and Nordic noir.

Indonesian and Italian
Spiekeria (Dutch) is my favourite pizza place.

I live in the city of Leiden, The Netherlands. I live near central station and the Morspoort.

Contemporary bands who play Berlin School are ARC and Redshift;

If you know any others, let me know.

I also like a bit of minimal, Satie and Debussy.
In particular Steve Reich's Music for 18 Musicians (Youtube).
There is a nice two part BBC 4 documentary called 'Tones, Drones and Arpeggios, The Magic of Minimal' on the subject;

I consider homo sapiens to be more then one species.

Renaissance men, lateral thinkers, out of the box thinkers, creatives.

Anglo-Saxon style managers, ESFJ Myers-Briggs personality type, pigeon-hole thinkers.
These managers are like Soviet apparatchiks. So in a way communism won after all.

Think before you act (which is like look before you leap).
Don't just think, think hard.
Assumption is the mother of most fuck-ups.
Race is mostly a social construct.
Identity politics is like pigeon holing. Pigeon holing is like fitting a square peg into a round hole. Fitting a square peg into a round hole is intrinsically violent.
Cliches are delusions (Gay stereotypes for instance, apply to 2% of the gay population. The other 98% aren't like that at all!).
Stupidity is the root of most evil; Good intentions do not necessarily lead to good results. Which is why the road to hell is paved with good intentions.
A lot of innovation is rooted in cultural appropriation (I like crossover stuff).
A Nice Oscar Wilde quote: The truth is rarely pure and never simple.
Nothing is more surreal then reality.
Narrative journalism sux.

Some of my stuff.

A couple of decades ago, the idea of owning an air conditioner (Dutch: airco) seemed completely ridiculous. Now, due to climate change, you really need one!

I have set-top boxes for both satellite and cable. The audio is sent to my stereo. The video to the RGB-SCART input of an old TV.
I intent to replace the TV by an HDMI monitor. Which I can also use in combination with my PC and therefore VLC.
Both set-top boxes record on local hard-disks. So there is no storage in a cloud.

Some vehicles are nice to;

I drive a bike.
An excellent bike site: Fietsersbond.nl (Dutch).

Wikipedia is my favourite website.
I absolutely loathe websites that look like advertising. Their pointless drivel airbrushed way beyond a polished turd.
Wikipedia is what the web was invented for. It is in fact, what the internet was invented for.
They shouldn't have merged 'Berlin School of electronic music' with 'Krautrock' though. These are distinctly different styles of music.
On webarchive the most recent (20 Feb 2017) pre-merge page on Berlin School of electronic music.